Drive a taco truck through this crazy world 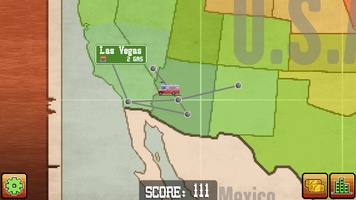 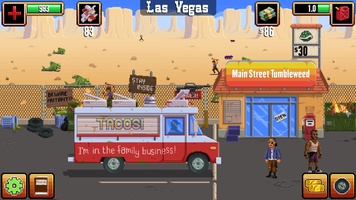 Advertisement
Gunman Taco Truck is an action and cooking game in which you get behind the wheel of a taco trunk armed with a machine gun. The game is set in a post-apocalyptic future in which atomic bombs have demolished almost everything on the planet. Your goal is to drive the taco truck through this crazy world, killing all the mutants that get in your way and giving tacos to the survivors that you run into.

The gameplay in Gunman Taco Truck is divided into two very different parts. On one hand, you have to drive the taco truck and kill off all the enemies that you see along the way, thanks to which you will get resources to make your tacos. On the other hand, you have to make and sell food, preparing tacos for all your customers. But be careful, because if you serve the wrong taco, you will lose the ingredients as well as the money.

Gunman Taco Truck is a fun and original game with charming graphics, an excellent soundtrack, and a very addictive gameplay. The game also has tons of content in the form of ingredients, tacos, customers, weapons, enemies, and much more.
Reviewed by Andrés López Translated by Taryn
Advertisement

Why is this app published on Uptodown?
(More information)

There are opinions about Gunman Taco Truck yet. Be the first! Comment Oct 4th, 2017 National Taco Day may be over but these taco-flavored games are still terrific

100 DAYS - Zombie Survival
Survive the tireless hordes of zombies
Way of Retribution: Awakening
An RPG like Dark Souls for Android
Guess the Logo
Guess what these logos represent
Romancing Saga Re: univerSe (JP)
A new chapter of the Romancing Saga
Candy Charming
Combine candies to discover magical kingdoms
Beat Slash
Dawn of Dynasty
Expand your territory and repel attacks
Wonderpants Rocky Rumble
Get thrown and destroy everything in your path